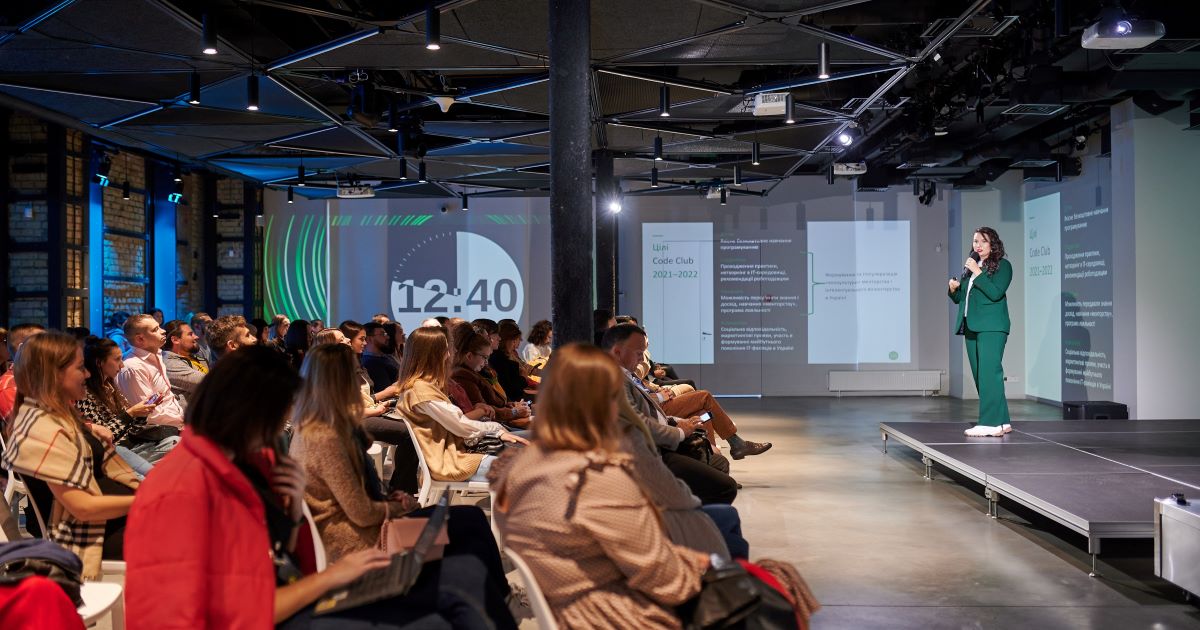 Mentoring is becoming a must have for Ukraine's business, education and culture

On October 2, the All-Ukrainian myth "Mentoring in your DNA" took place in Kyiv. More than 100 guests gathered to talk about mentoring, its development and prospects in Ukraine, for companies and everyone. The event was organized by the Code Club Ukraine volunteer initiative and the Vasyl Khmelnytsky K.Fund Foundation, which hosted the Unit.City.

If you count the number of hours spent on pro bono and the cost of services, about $ 212 million has been invested in free assistance in the world! This amount consists of the point efforts of mentors, intellectual volunteers in various fields. How it works and why it is important for the whole society, said the speakers of the myth.

Victoria Tigipko, founder and managing partner of TA Ventures, president of ICLUB Global, founder of Code Club Ukraine, stressed that today Ukraine needs to change the education system and integrate volunteer opportunities. Then even more Ukrainian children will be able to speak digital, create their own projects soon, which the funds will then invest and bring to the international arena. And there will be more food companies in Ukraine.

The speech of Lydia Pashchuk, President of the K.Fund Foundation, Head of the School of Small and Medium Business, was dedicated to the topic "Mentoring - why and why?":

- Mentoring is definitely a trend, 76% of organizations in Europe offer mentoring to their employees. The latter themselves make a request for mentoring as a social package. In the United States annually 5-20 thousand dollars. and more are those people who declare that they have a mentor. And 85% of startups admit that they need a mentor. For example, in our projects we teach residents entrepreneurship, programming. It is not necessary for everyone to become entrepreneurs or IT specialists, but it is necessary to change the perception of entrepreneurship in our country. Thinking needs to change, to create this entrepreneurial culture from the school desk, in particular with the help of mentoring.

Alina Shcherbyna, the head of the initiative, told how the mentoring culture is formed in Code Club Ukraine. In total, more than 30,000 students studied here for free in 8 years, and the initiative attracted more than 2,500,000 mentors. The speaker noted that the project not only teaches the younger generation of IT, but also teaches IT professionals to be mentors: to teach on the principle of Tell-Show-Do, to teach, to find approaches to modern children. For this purpose thematic webinars, meetings with experts of various spheres are developed, experienced mentors share expertise with beginners. This is how the mentoring community is formed, which inspires more and more people:

_- Indeed, everyone needs mentoring at different periods of their lives. The companies and projects gathered at the meeting are the driving force that builds the mentoring ecoculture in Ukraine. Soon each of us will write in the resume, in general everywhere, that he is a mentor, on which questions you can contact him and get answers, - _predicts Alina Shcherbyna.

Victor Galasyuk, President of the Ukrainian Association of the Club of Rome, made an exciting presentation "Metacompetence for Success." He noted that leadership is a very important story, because the vector of development of our society depends on what these people will be and with what values. And it is in the process of mentoring that you can lay this foundation:

- I completely agree with the words that the main task of leaders is to create new leaders. In general, people fall into two categories: 97% are users of reality, those who accept the rules of the game. They go with the flow, very often live in the moment and sometimes do not even realize that they are living according to a script created by someone else. The second category of people, only 3%, are architects, leaders, who in a certain way set the rules of the game, - explains Victor Galasyuk.

Anna Machukh, Executive Director of the Ukrainian Film Academy, Director General of the OIFF, spoke about mentoring and volunteering in the film industry. The figures of the festival are impressive: 100 project workers, 150 volunteers and 400 contractors. Today, becoming a volunteer at the festival is not easy, because the offer is greater than necessary. Therefore, only motivated people are selected, a training program is organized, and then they are distributed among the departments according to their characteristics. The main skills of OIFF volunteers: initiative, flexibility, creativity, system.

Mentoring is a challenge of today, but also a great responsibility and honor. The trend is actively developing in Ukraine, gradually changing the modern business culture, education and social background. This was discussed by the participants of the discussion panel "Mentoring trends and trends in Ukraine and the world."

Vadym Zelinichenko, Director of Human Resources Management at Tascombank, noted that mentoring is one of the components not only of his work, but also of public life. He is convinced that mentoring should be offered only to professionals who are interested and motivated in their own development, and this process must be two-way. Both the cop and the mentor should benefit and grow in their own direction.

Vladislav Makhlay, Director of the Corporate Business Department of TAS Life, said that the company practices mentoring not only internally, but also teaches children financial literacy at Code Club Ukraine, understanding the urgent need of Ukrainians for such knowledge.

Mentoring of children is the foundation of the country's development, the world that needs to be supported, said Olena Orlova, CRM Lead Uklon:

- In general, everyone is subject to mentoring at different stages of their lives. Uklon understands this well, so they implement various mentoring programs, such as sharing new knowledge within the company and a personal mentor for the employee.

Yermek Kadyrbayev, Cloud and Key SDET Manager at SQUAD, concluded from his experience in various fields that IT mentoring is very common in IT. At SQUAD, he practices mentoring for free of his own free will because he has such an inner need. In general, the company has an interesting principle of hiring employees: learn and be inquisitive, hire the best and develop them.

Ksenia Tyurikova, Head of PR Communications and Employer Branding BetInvest, is convinced that the experience of mentoring shows the best side. In addition to the fact that the mentor has a communication skills, a sense of team, team building, he really has the knowledge and desire to do socially important things. This is how the ecosystem within companies is built, because there is trust and mutual assistance between colleagues.